To mark the 80th anniversary of the Great New England Hurricane of 1938 this week (9/21/1938) a Category 5 storm that took more than 600 lives along Rhode Island’s coast. The storm surge hit the Green Hill beach community around 4-5 p.m.with wind speeds measured at 168 miles per hour. This storm delivered the fastest forward speed, upwards of 60 mph, ever recorded. This storm remains the most powerful and deadliest hurricane ever recorded in New England history.

The storm arrived with no warning on the heels of what had been a beautiful and stunning start to that fateful September day. Because the weather was so nice, a time when people should have been evacuating, they were instead headed to the barrier beaches of South County for one last glorious summer day. The storm, catching people by surprise resulted in hundreds of drownings from the storm surge. When you read the detailed oral history of those that lived through the storm, one is struck by the accounts of the terrifying, looming gray green tidal wave that swept over spots like Charlestown Beach, turning our salt ponds into mass burial grounds.

Many beach communities were obliterated all along the coast of Rhode Island during the storm, and lighthouse captains from New Jersey to Quebec were on the front lines of the devastation. Located in Narragansett Bay, Whale Rock is the smallest island in Rhode Island. The island received its names because it is shaped like a whale’s back or a submarine’s bow. It was responsible for numerous shipwrecks prior to the construction of a lighthouse. Whale Rock Light was built on the rock in 1882; it was destroyed by the 1938 New England hurricane, which also claimed the life of keeper Walter Barge Eberle.

Whale Rock sits at the entrance to the West Passage of Narragansett Bay. It claimed at least eight ships and six lives before the Lighthouse Board recommended building a lighthouse on the rock in 1872. In its annual report for that year, the Board described it as a “a reef of rocks awash at all stages of tides, and a dangerous obstruction to navigation … ” Congress ignored the Board’s recommendation for nine years.

In 1881 Congress finally appropriated $35,000 to build Whale Rock Light. Building the light wasn’t easy. Work could only be done at low tide and calm seas. Only the light’s foundation was finished before autumn storms forced construction to stop. The light was completed in 1882 and lighted on October 1st of that year. 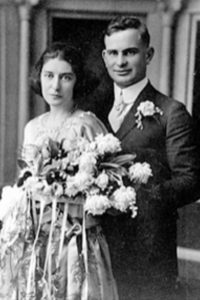 On September 21, 1938 Whale Rock’s keeper Daniel Sullivan went ashore to get supplies. The assistant keeper, Walter Barge Eberle, was left in charge of the light. The former navy man had been with the Lighthouse Service for just a year. While Sullivan was ashore the 1938 Hurricane hit Rhode Island and prevented him from returning to the light.

Whale Rock Light was hit repeatedly by waves that grew bigger as the storm grew stronger. Eberle probably took refuge in the lighthouse’s top floor. Keepers at similar lighthouses in the area rode out the storm in the top floor, as the sea smashed out the sash windows on the lower floors, but did not break the port holes on the top floor. After hours of this punishment, the metal lighthouse reached its breaking point. When the tidal wave hit the lighthouse, it tore off the lantern, watch room and the light’s top two stories, killing Eberle. His body was never found. He left a wife and six children. The bottom two floors collapsed into the base, shortly after the hurricane ended.

Over the years there had been speculation that Whale Rock Lighthouse wasn’t fastened to its base. One keeper even put this belief into the lighthouse’s log. Some local residents believed this was the reason the lighthouse was destroyed. On November 9, 1938, the 2nd District Associate Engineer visited the remains of Whale Rock Lighthouse to find out why it was destroyed. During the examination of its concrete base, he discovered the lighthouse wasn’t fastened to the base. He found “no evidence of anchor bolts or any other means by which the cast iron tower plates were actually held the masonry pier, except for the brick tower lining, which appeared to be 8″ thick at the bottom, and the mass of the entire tower.” This wasn’t the reason the lighthouse was destroyed, though. The engineer found some of the bolts holding the lighthouse’s cast iron plate together were corroded. This weakened its structural integrity. The repeated pounding of the waves on September 21 jarred the corroded bolts loose and tore the top off.

On September 28, 1938, a type 9-38-W buoy was placed 300 yards east from Whale Rock. This new navigation aid was named Whale Rock Lighted Whistle Buoy 3. The people of Jamestown complained that it emitted “a most mournful depressing sound.” Read the formal complaint letter describing the somber, wistful sound of the buoy marker. They wanted it changed to either a lighted gong or bell buoy. The buoy was later changed to a gong buoy. In 1940 what remained of the lighthouse was removed from the base. A skeleton tower and light was placed on the base. The light was was extinguished during World War II so it couldn’t be used as an aid to navigation by German U-boats. The light was removed in the 1950’s.

In 2004 David Robinson, an undersea archeologist with the Public Archeology Lab in Pawtucket, Rhode Island, located the metal remains of the lighthouse. He said, the seabed was scattered with “millions of pieces of metal, some as big as desks.” 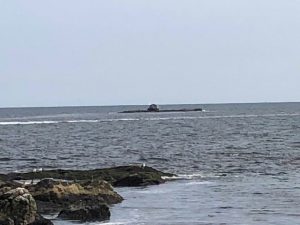 In August I took a drive to have a look at Whale Rock myself. I thought I would be able to see it from Narragansett Beach, but that is not the case. [Ambitious Narragansett beach swimmers can be seen swimming in tandem out and around a big rock off of Narragansett Beach and many mistakenly think this is Whale Rock.] The real Whale Rock is a bit further up the coast, over and past Narrow River.

Driving away from the beach on Boston Neck Road, I took a right on Anawam Drive, and looped through a neighborhood of million dollar homes to Cliff Drive. From Cliff Drive, I parked my car along the side and followed a public access point in between 2 homes to reach the rocky coastal beach. A friendly resident hearing my mission pointed me in the right direction, which was not obvious. When you reach the water’s edge, you will see Whale Rock straight ahead. Today all that remains of Whale Rock Lighthouse are the remnants of the foundation. It’s gradually disintegrating and someday will be completely gone. The off season is the perfect time to take this local drive and see Whale Rock for yourself. While you’re there, say a prayer for lighthouse keeper Walter Barge Eberle. That poor man didn’t stand a chance of surviving and I can only imagine the terror of his last moments on earth.