Theater By The Sea

Theater by the Sea started as the Browning’s Ocean Star Cottage. Learn about the early beginning of Theater by the Sea, as told by Oliver H. Stedman, a well known and documented South County, RI historian

In 1891 Mr. George N. Browning, who at this time was the owner of the large farm comprising what is now the present site of Theater By The Sea, decided that taking summer boarders might be a more profitable venture than farming. So he enlarged his farmhouse and opened it for the entertainment of summer vacationers and named it Ocean Star Cottage. With its delightful location, fronting the ocean and a pristine beach, the Browning’s summer business prospered and began to attract a list of affluent summer visitors. Mr. Browning also enlarged his barn so his guests would have stables for their horses and carriages during their summer stay.

Mr. Browning was a showman and inn keeper and later acquired tally-ho with which he entertained Ocean Star guests driving them throughout the Matunuck countryside. Mrs. Browning and her staff served delicious meals to those that came to enjoy the beautiful, pristine private beach.

Mr. Browning died in the summer of 1914. Mrs Browning continued the operation of the Inn for summer guests until 1919.

In December of 1921 the property was sold to Mr. and Mrs. Leonard Tyler of New Haven. The following summer they made extensive improvements to the property to convert it into a spacious and comfortable summer home.

Mrs. Alice Janes Tyler had a liking for theater, playwriting and acting, and shared this passion with her 3 children:  Matilda, Mary and Franklin. Franklin later was a casualty of of the air force in Word War 2. The children found the big, vacant barn an ideal place for entertaining themselves during the long summer days. Mrs. Tyler encouraged them to dress up and act out little plays, and the loft soon became the stage of a little theater.

In 1929 Mr. Tyler died leaving his wife to care for the sizable estate and a growing family. But Mrs Tyler was a very resourceful person and turned her love of the theater to good advantage. That fall the great depression arrived and threw many people out of work, among them many form the theater industry. Mrs. Tyler contacted friends in NY and offered free board and rooms to unemployed theater carpenters for as long as it might take to convert the big barn at Matunuck into a theater building. She found 3 actor carpenters who accepted her offer. For the next 3 years, they stayed in Matunuck and turned the barn into what is today Theater by the Sea.

In late June of 1933 the job was finished and the new playhouse opened under Mrs. Tyler’s management. Broadway stars from a stock company were happy to avail themselves of the relaxation of a summer out of NY and into the cool ocean breezes along the Matunuck shore. Mrs. Tyler also opened the cottages at the Inn by the Sea, where she lodged and served the cast, their guests, and patrons of the theater. Over time, Matunuck became well known along the eastern seaboard, until being interrupted by the beginning of WW2.

Operations were suspended after the summer of 1941 and Mrs. Tyler later offered the use of the theater and the Inn to the government for any use they might have for it during the war emergency. Her offer was not accepted. 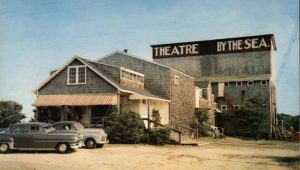 The theater and Inn were reopened in 1947, but by that time Mrs. Tyler has relinquished the management of the theater to professional theater people from NY. This arrangement continued for many seasons. Mrs. Tyler passed away in 1959. She was a most energetic and businesslike person and sterling character to those that knew her. After her passing, the theater and was taken over by the Bontecou Family of New York.

For more recent history on the 500 capacity Theater By The Sea, here’s an article from The Independent that chronicles more of the theater’s 85 year history, including Bill Hanney’s current day ownership. He purchased the theater in 2007. To visit a performance at Theater by the Sea and learn about all their offerings, visit their website. 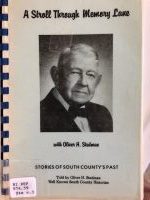 Source:  Direct excerpts of article on Theater by the Sea by Oliver H. Stedman, who was the electrician for the Inn and theater during those early hectic summer days. A Stroll Through Memory Lane by Oliver Stedman, Volume 3. Copyright 1978. Cross Mills Library.