Are there Green Hill Mountain Lions?

A favorite pastime of mine is reviewing the comments section of articles online. Reading anecdotal experiences of others is not proven or even  empirically significant. But is sure does make for some interesting reading!

Here are some remarks I picked up on the blogs & local newspapers on the probability of Cougars in our midst:

I’m from Matunuck ….there is definately a small, but thriving population of cougars in the farmland of Matunuck. I have seen first hand, 2 adolescent mountain lions and their mother. I have also seen mutilated carcasses of deer that clearly show evidence of a big cat attack. I’ve spoken to farmers and other residents who own large areas of open farmland in Matunuck who claim to have seen mountain lions and/or evidence of them in the area. With one of the highest populations of white tailed deer in Rhode Island, it’s easy to see how they have established a home as the new apex predators in the area – replacing the former dominant predator, the eastern coyote. 2012 Source:  http://ctmountainlion.org/ 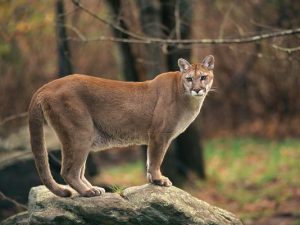 Mountain lions are not coming to South Kingstown; they’re already here. That is the opinion of Matunuck resident Bill Betty, who believes there is at least one big cat living in Matunuck. After three deer were killed on his property in March, Matunuck resident Abel Collins found what he suspected might be a mountain lion track nearby. Bill Betty of Matunuck, a mountain lion expert who spoke at the South Kingstown Land Trust barn Oct. 30, thinks there is ample evidence pointing to the existence of a mountain lion in Matunuck. Betty lectures across the country about big cat sightings. Source:  http://www.independentri.com/

If You Encounter a Green Hill Mountain Lions or Wild Cat:

Green Hill Rocks has no expertise with regards to Wild Cats or can speak to proven evidence of them in our local woods and farmlands. Here we share insights we found in the public domain, which we were sparked to track down based on this month’s article in the South County Press.

← Green Hill Civic Association Do It Yourself Rustic Log Table →