On a hilltop on South Ferry Road in Narragansett, RI and located 1,000 feet from Narragansett Bay sits the South Ferry Church where I recently attended the presentation, “Climate Change in Rhode Island”.

The impressive guest speakers included Gail Scrowcraft, Associate Director of the Inner Space Center at URI Graduate School of Oceanography and Jonathan Stone, Executive Director of Save the Bay. Here’s background on each speaker and the insights they shared with the audience:

Insights on the GLOBAL perspective on climate change.

In addition to her teaching role at URI, Ms. Scrowcroft is an international leader in ocean and climate science education, lecturing across the globe on related issues. She is currently working with the United Nations Intergovernmental Oceanographic Commission to develop international collaborations for the blue economy. Learn more about her work on her website.

How is the World Addressing Climate Change?

The intergovernmental panel on Climate Change (IPCC) was established in 1988 by the United Nations in partnership with the World Meteorological Organization (WMO). The IPCC is the most reliable source of information on the current scientific understanding about climate change and the potential environmental and socio-economic impacts. Visit their data rich website to dive deeper into their work.

The EPA reports CO2 levels about every 5 years. The last report was in 2016 which showed that the majority of US Carbon Dioxide Emissions come from Electricity, Transportation & Industry.

Listen to Professor Scrowcroft in this video short talk about the unprecedented trend in rising global temperatures and its impact on our species:

About the Paris Agreement

In 2015, the Paris Agreement was drafted by the UN Framework Conventions on Climate Change [UNFCCC] and adopted by consensus in December 2015.

The Paris Agreement’s long term goal is to keep the increase in global average temperatures to well below 2 degrees C above pre-industrial levels; and to limit the increase to 1.5 degree celsius, since this would reduce the risks and effects of climate change.

As of last month (July 2018), 195 UNFCCC members have signed the agreement, and 179 have become party to it. Each country shall determine, plan and regularly report on the contribution it undertakes to make in order to mitigate climate change.

In June 2017, the current President of the United States stood in the Rose Garden to announce that the US would withdraw from the Paris Climate Agreement, which was signed by all other nations on earth. Read more about this fateful day from the Brookings Institute here.

Insights on the LOCAL R.I. perspective on climate change. 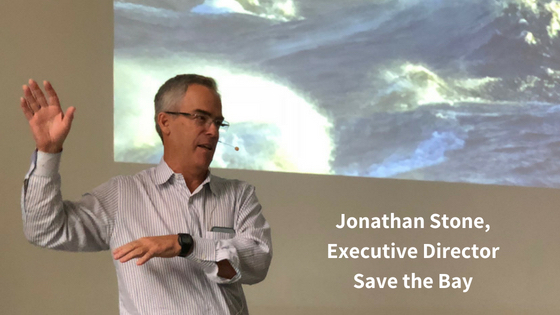 Mr. Stone is a graduate of Brown University & Harvard Business School. Before taking over as Executive Director of Save the Bay in 2009, he ran his own investment management company that served a variety of industries including renewable energy, and oil and gas exploration. Learn more about Save the Bay and Mr. Stone’s here.

…… after hearing Mr. Stone make this statement on seawalls, I later looked up the reasons why seawalls built to protect residential properties are controversial and learned:

Given their spectacular locations, homes in the frontline of raging waves are usually valuable property. Attempts to fortify them are met with resistance from ecologists and other beach users, who say the houses should not have been built there in the first place. They object to seawalls because seawalls stop the beach from being a dynamic system, in which wind and waves continually reshape the shore. Natural processes will usually redeposit the lost sand back on to beaches in the weeks after a storm. But where there is a seawall, heightened waves run up the shore and slam against it. The beach can’t move backwards, so the sand disappears.

About the Extended “Growing Season” due to Temperature Rise:

Because of rising temperatures, our growing season in Rhode Island is longer than in years past. This is showing a big time impact on the composition of our fish species in Narragansett waters. Because biological activity has a longer season to be active, and because temperatures are higher, we are seeing huge shifts in fish species migrating to and from our R.I. waters.

Rhode Island is highly vulnerable. It is important that we prepare for what is coming our way due to climate change. We need to spend more time and resources on:

Things You Can Do

Both speakers emphasized that there is hope to stabilize things if we take action now. We need to elect and support political leaders that believe in science and will follow the actions advised by the top scientific leaders in the US and the International community for preserving and protecting the planet for the sustainability of our species. By taking action now, things will not improve, but we can stabilize matters for our grandchildren and those living in the years 2080-2100 & beyond.

Save the Date for October 13:  Inner Space Center Open House!

Attend the Inner Space Center’s October 13th Open House at URI’s Narragansett campus to tour the facility and their vessel. Bring your questions to the Scientists! Follow their Facebook Page for details on this event & other upcoming events.

Watch This Video on Scientific Literacy by Neil DeGrasse Tyson

In April 2017 I published a video on Green Hill Rocks where Neil DeGrasses Tyson speaks about Scientific Literacy. It’s had 525 views to date. If you haven’t seen it, check it out by clicking here.

← Septic Inspections Resume in Green Hill Theater By The Sea →